Sew Politik: why we need to understand sewing as a political act, and why it matters.

There is nothing innocent about sewing. Nothing apolitical about the act of reaching into your stash, gliding your fingers down the warp and weft lines to find the grain. There is an act of politics in choosing a pattern made by another, slicing your scissors down the ‘correct’ size line and piling up shape after shape to stitch together and adorn your body with. When you do this, you follow the deeply political history of resistance and display and memory in some small way.

The way you hand stitch the edge of a collar, or embroider a patch, repair an elbow, or sew a label reading ‘Sewn Slowly’, your fingers map the trace marks of other makers like ourselves throughout history and across vast geographies. Whether made out of necessity, desperation or freedom, we imbue meaning in the clothes we make just by creating them, then wearing them, then declaring ‘I made it myself, it has pockets!’ when asked where it came from.

In this introductory blog I begin to untangle examples of sewing, embroidery and craft that intersect with activism, slavery, and colonialism to better understand why sewing is such a political act. There will always be more to uncover and write about, which in time I will, but for now I’ll start with this. Expect more on the underground railroad, Uzbek cotton production, embroidery from the Palestine diaspora, and the miners strikes. Please feel free to share with others, correct me, embellish, add something into the comments. All is welcome!

Both cloth and style have been wielded as the tool of the oppressor for centuries. Oppression is not simply about the act of physical violence but about the stripping away of culture, the watering down and co-option of values and dress. The intention behind the white colonial project is to force order onto populations, to cut ties from a people’s history and culture in order to force them to ‘assimilate’. Assimilation slithers and poisons via many means, disguised as a ‘civilisation project’ which has historically been nothing more than a power grab. By stripping back traditional clothing, teachings, religion, narratives, you ‘render it mute… which makes assimilation more easily managed’ (Clare Hunter, Threads of life). Clothing in this way becomes a tool to commit violence.

As Clare Hunter writes in her wonderful book, Threads of Life, 'missionaries mounted zealous campaigns to reclothe tribes in more ‘suited’ apparel’, the adopted of which signalled compliance and conversion’ (72). This included encouraging the wives of missionaries to set up needlework schools which sought to take control of local and indigenous narratives, histories and ways of expression. This form of ‘cultural erosion’ was designed to suggest that indigenous ways of life are simply ‘innocuous and charming remnants of peasant life’ (74) rather than conveying them as acts of agency within indigenous populations.

Clothing has always been the arena in which judgement and power manifests. It is, as Kassia St Clair writes in The Golden Thread, ‘another landscape over which the dynamics of power were played out’. In her book, St Clair talks about 1835 in South Carolina, where a law was passed which ‘limited the materials enslaved peoples could wear to the cheapest and meanest available’, this meant homespun fabrics were most commonly made by slaves themselves, with a ‘plain weave or either wool or cotton depending on what was most readily available’ (163). Colour used to dye those fabrics were most likely to be blue or brown depending on which materials were available for hand dying, like indigo leaves or walnut (as pictured below). 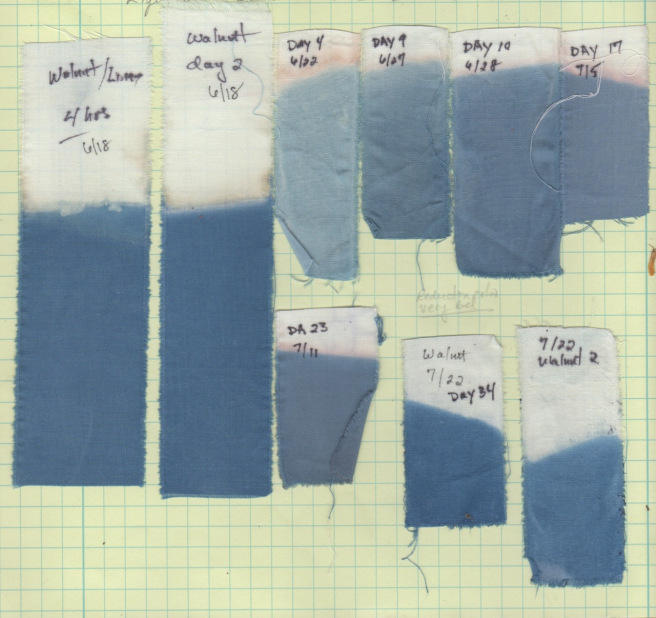 Most importantly, cloth and clothing were tools of resistance for enslaved peoples, and indigenous people under colonial rule. St Clair talks about the ways in which enslaved peoples sought to dismantle hierarchies by participating in consumption, by ‘buying, acquiring, coveting, adapting and styling clothings, enslaved peoples were participating in a cycle of consumption and display parallel to that of white Americans and often incomprehensible to them’ (166). By consuming and adapting they were taking control of aspects of capitalism that white people had tried to prevent them from accessing at all.

We must not forget these methods of resistance, and that enslaved African Americans were ‘eminently capable of obtaining clothing theoretically forbidden to them, and of carefully and intentionally carving out an aesthetic altogether their own’ (163). By failing to look back at the violence in our history, we also fail to talk about the agency of Black enslaved people in these everyday examples of disruption. We must hold them both simultaneously, learning from pain inflicted by white slave owners, whilst also honouring and giving power to those who committed acts of resistance through choices in cloth, and adaptations to style.

I’ve not participated in the skilled art of quilt making, but it has a rich history that is wrapped up in slavery and economic independence. Whilst the Black history of quilting can be disregarded or wilfully ignored by white contemporary quilters, this is one area that we are fortunate enough to have several wonderful resources on. These resources help to tell the stories of those African American quilt makers who were - and indeed continue to be - instrumental in the history of the craft.

Many of you will already be familiar with Gee’s bend quilt makers, a rural and remote Black community in Alabama who have ‘created hundreds of quilt masterpieces dating from the early 20th century to the present. Some of the Gee’s bend quilts are featured below, click through to find out more about each artist. It is a remarkable history in which ‘works have been found by three or sometimes four generations of women in the same family… as a result of geographically isolation and an unusual degree of cultural continuity’. This enslaved community began quilting for warmth, with quilts pieced together from scraps of clothing creating abstract designs. Such patterns were passed down through multiple generations. It was during the Civil Rights movement in 1966 that the Freedom Quilting Bee was established in Rehoboth, not far away from Gee’s Bend, which provided African-American women to gain economic independence through the sale of their beautiful quilting. Quilting was for the Gee’s Bend women, both an economic necessity and in the late 60’s, an economic opportunity. Please click through to each quilt below to learn more about each artist. 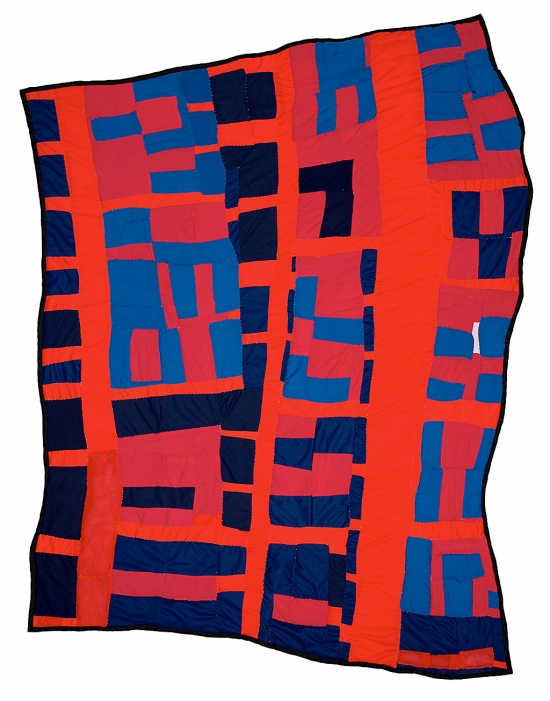 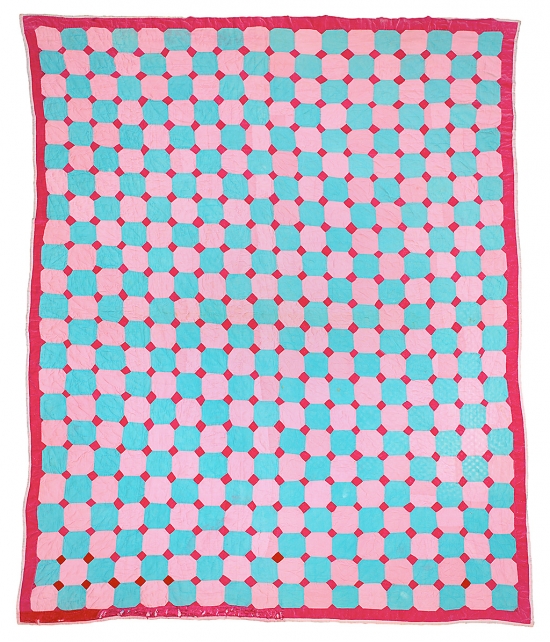 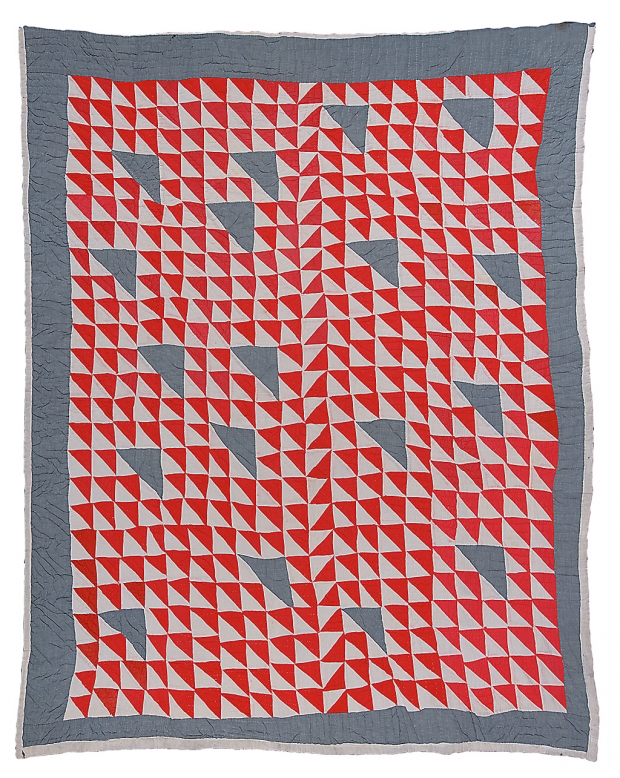 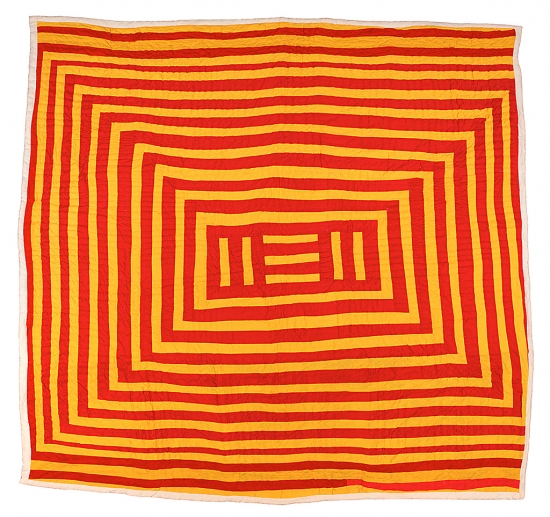 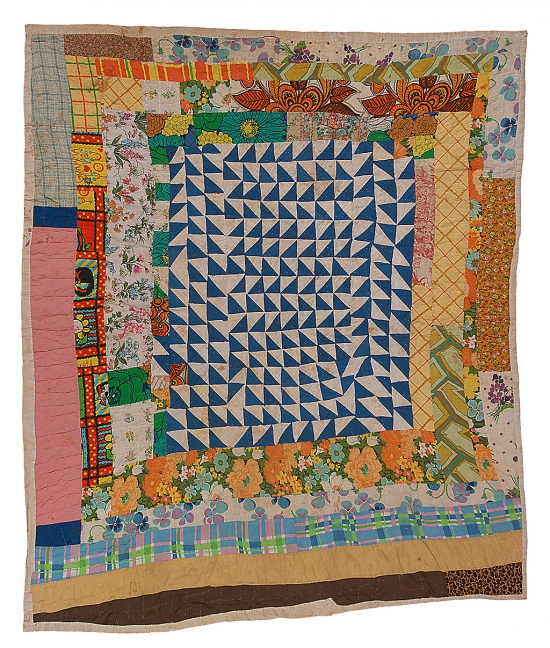 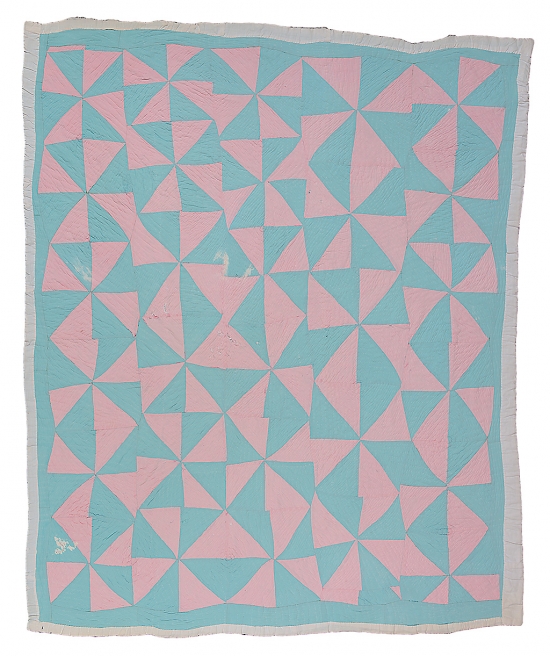 Faith Ringold, a Black artist from Harlem, New York, is an activist, writer and lecturer and artist who talks about race and diversification of museums in her artwork. She has used quilting in her work since the 1980s and is political and subversive in her designs. You want to stare at her work, just take in the sheer vastness of it. In a piece for the New York Times, the writer takes us through a history of her art;

“In a quilt from her “American Collection” series (1997), she painted the Statue of Liberty with her own face and dreadlocks in a harbor full of flailing black figures. Her painting of the American flag called “Freedom of Speech” is covered with handwritten names in gold of everyone from Harriet Tubman to Jesse Helms.”

Every painted quilt offers a critique, a powerful and colourful story, a tangible history that many have chosen to ignore, of slavery and white power and the dominance of whiteness not only in our museums but our political systems and our teaching of history. Black quilting history does not stop at the abolition of slavery, but continues through Faith Ringold’s work, and into modern day social justice movements. We must not forget to reflect the vast history that quilting has when we partake in this long tradition of craft-making.

3. Sewing as Anti-Fascism and Agency

As Faith Ringold’s work shows, textile art has long been a tool of resistance. In Mexico and Chile in particular it has been a powerful story of resistance against fascist regimes. In Alyce McGovern’s book Craftivism and Yarn Bombing, which looks at craftivism through a criminological lens, she takes us through a history of women using crafts as protest against large social injustice, ‘for many even the capacity to retain and pass on traditional craft practices in and of themselves are a mode of resistance, as well as a tool through which more explicit acts of defiance can be practiced’ (18).

In Chile, a protest movement which grew in response to the Chilean military dictator General Pinochet between 1973 and 1990, craft and embroidery were key elements of resistance. Pinochet led 17 years of economic ruin and social violence, with thousands disappeared, murdered and tortured. Arpilleras served to document and denounce oppression in a country where all normal channels of free expression were closed.

An Arpillera is an ‘brightly coloured tapestry and quilted square and appliqué with scenes depicting Chilean life under Pinochet… the effects of Pinochet’s rule were told through these quilt squares, which visually ‘protested the injustice of the regime’ by depicting its impacts in textile form.’ (McGovern, pg 37). These Arpilleras have ‘borne witness to the reality of chilean people’s existence under the military junta - the search for the disappeared, the vigils for prisoners, the arbitrary arrests, extreme poverty, unemployment, and so on.’ (Moya-Raggio 1984: 278). It is through creative practice of embroidery and appliqué that Chilean women were able to mobilise and show agency in the face of untold violence.

Similarly in Mexico, handkerchiefs can be found embroidered with the names of family members and friends who have been murdered as a result of the war on drugs. These handkerchiefs are a self-declared form of protest, ‘Our work is a political statement. We prefer not to call it art… we’d be closing off our protest to elitist spaces’ (Lauren Cocking, Vice). These delicate and poignant works can be seen below, as part of a 2017 Fuentes Rojas March in Protest of the Ayotzinapa student disappearances in 2014 which 43 students were forcibly abducted and disappeared at the hands of cartel violence.

Where does this leave us?

There is so much more to talk about and so much more history to cover, and I ask that you go away and learn more - and then message me about it! We haven’t even dipped out toes into the water yet. But I hope this blog has hinted at the ways in which the materials we use, the styles we choose to wear, and the types of crafting we partake in are steeped in histories that many of us do not yet fully understand.

It is a privilege to not have to use your craft as a means of protest for your rights, or those of the ones you love.

Sewing may not be for you inherently political, but we should all take some time to look for the ways that stitches have been used for resistance, both peaceful and riotous. I ask that you don’t just exist on instagram, but seek out resources that help you understand the darker and more violent aspects of the history of sewing, as well as the ways it is used to subvert power. Then use your platform to talk about it. Share your resources, correct someone who is getting it wrong, reach out to companies that simply aren't doing enough for racial justice. I will be doing the same.

In the meantime, if you are looking for a great sewing-as-activism group to donate your money to, then join me in giving some money (or some time and quilting!) to the Social Justice Sewing Academy.

"Founded in 2017, the Social Justice Sewing Academy (SJSA) is a youth education program that bridges artistic expression with activism to advocate for social justice. Through a series of hands-on workshops in schools, prisons and community centers across the country, SJSA empowers youth to use textile art as a vehicle for personal transformation and community cohesion and become agents of social change."

The Zadie Jumpsuit - Adjustments and Review